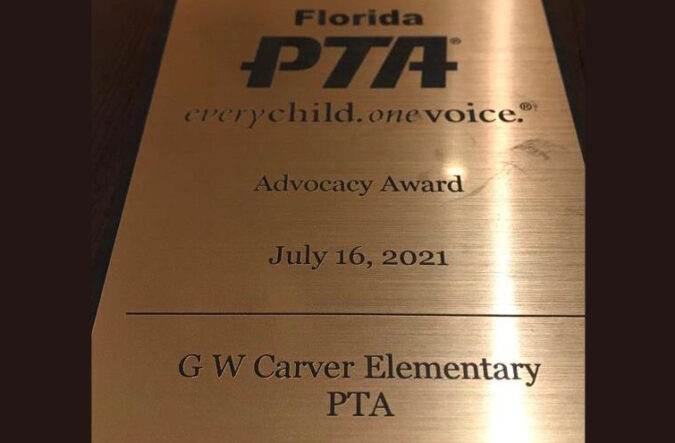 The George Washington Carver Elementary School PTA received its second advocacy award this past week, this time from the Florida PTA for their work with the community to address the controversial construction of a Wawa gas station across the street from their children’s school.

The advocacy award “is given to the PTA units that are promoting and supporting activities that advocate for students; changing laws, processes or methods to better the lives of every child. These activities must encompass the mission and purpose of PTA.”

A press release from the PTA reads as follows:

“PTA is the largest child advocacy organization in the country, speaking up for children so that they can achieve their full potential,” said Lockhart, who is now the Carver PTA’s vice president for advocacy and community relations. “Thank you to the Florida PTA for recognizing our advocacy efforts regarding commercial developments around schools. It’s a valuable, timely discussion and we are proud to be a part of it.”

Coral Gables Senior High School won a “Humanitarian” award for an essay-writing program that encouraged students to express how they had been impacted by the coronavirus pandemic.

Little Carver’s advocacy project began in the Fall of 2020 when a rumor started spreading that a six-pump gas station was to be installed in a lot in front of school that had sat empty for decades. Neither the school nor its administrators were ever notified despite significant health and safety risks as well as EPA guidelines that recommend against the locating of gas stations within 1,000 feet of schools.

City of Coral Gables commissioners initially dismissed parents’ concerns, insisting that their hands were tied by a legal settlement with the developer to fast track approval of a commercial project on what was once County-owned land earmarked for affordable housing.

WAWA and the developer similarly ignored parents and hired a lobbyist to move forward with plans to bulldoze two decades-old Oak trees to make way for the gas station.

In January, PTA members along with residents formed the Gables Accountability Project, a Florida nonprofit organization, to sue the City of Coral Gables over the way the project was approved without public input.

To date, the group has the support of more than 300 individuals and has made important outreach efforts to environmental activists and community groups in the historically Black west Coconut Grove neighborhood where Carver is located.

After parents rang the alarm bell, a similarly outraged Miami Dade County Public Schools Board unanimously approved a resolution requiring that the Superintendent be notified in writing via certified mail prior to the approval of any commercial development that is to be built within 1,000 feet of a public school.