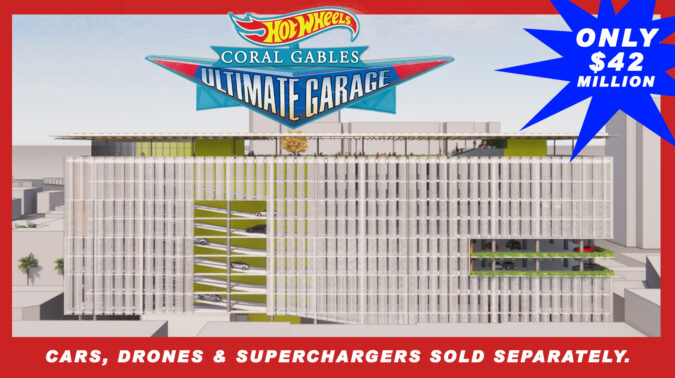 As the holidays approach, the commercials for new toys and gadgets fill the airwaves, tv screens and the web. Since I was a child, the Hot Wheels play sets were the best new toys I could ever hope to get. Now, the Coral Gables Commission is looking to bring one right to our downtown!

(Commercial audio): “Hot Wheels and Gensler bring you the Hot Wheels Coral Gables Ultimate Garage! With over 600 parking spaces, a rooftop park with drone landing zones, supercharger stations for electric vehicles, scooter and bicycle parking and retail shops on the ground floor. All for just $42 million! 10-floors taller than your Miracle Mile play set, it will this Coral Gables Ultimate Garage will make your Miracle Mile play set look like a Micro Machines set! With open ramps to see your cool Hot Wheels cars and openings that can feature your latest dinosaur sculptures, this garage is sure to be your favorite! Your residents say they don’t want it? Who cares! The Commission must approve right away! Cars, drones and superchargers not included.”

However, this wasn’t the original plan. In fact, W. Allen Morris had won an RFP to build a new garage at this location. His plan was, according to sources at City Hall, was not as tall as this building. It was for 97 feet, the City’s is over 132 feet, and 9 floors, the City’s is 10 floors. The proposal was also for 750 parking spaces, 124 more than the City’s 626 proposed. (See Morris proposal).

The design was one that featured a Mediterranean style, something residents have been asking the City for, since this plan was unveiled. The Commission in 2019 gave itself until fall of 2022 to break ground on the project in order to build the project itself, instead of accepting Morris’ project.

In fact, a resident petition asking the Commission for a redesign has nearly received 1,000 signatures. (See City’s plans for Mobility Hub).

Following a discussion at the November City Commission meeting, Commissioner Rhonda Anderson requested a sunshine meeting be held to discuss some of her concerns with the design. Notably, Mayor Vince Lago and Commissioner Kirk R. Menendez were not present. Lago informed Gables Insider he had a business trip and Menendez was at a previously scheduled family engagement.

Anderson’s concerns revolved around the design of the building. She suggested incorporating more green matter around the building to soften the hard white lines that Gensler’s ultra-modern design was presenting. She also explained that the white facade could bring a heat concern to the neighboring buildings and those using the sidewalks. Gensler did not disagree that it would, but said they were not concerned. One example of this is the “Walkie-Talkie” skyscraper in London, which began melting car parts when it was completed. London’s temperature is substantially lower than that of Coral Gables. Temperatures in London normally do not go above 74 degrees, in Coral Gables temperatures normally do not drop below 74 degrees.

Anderson also brought up the City’s Code requirement that headlights be screened at parking garages. The City would have to secure a variance, as this structure would have open space between the large white panels, which also have small circular openings which would let out the lights.

In fact, when asked about the screening of the lights, the Gensler representative said he was not sure where Anderson was getting this requirement from. Seemingly, Gensler had not checked the City’s code requirements prior to the design of the structure.

Commissioner Fors asked if anyone on the dais knew about the requirement for screening headlights, because it was before his time. Mena intervened stating that the point was to screen, because of residential properties near another garage.

Venny Torre, a developer, spoke in support of the project and explained that surrounding properties would have to adjust to the light issue if it bothered them.

Torre was one of only three people who spoke in favor of the project. The others were Miracle Mile landlord Jackson Rip Holmes and Coral Gables Chamber of Commerce President and CEO Mark Trowbridge. Trowbridge explained that Gensler had met with the Chamber. Not surprisingly, Gables Insider found no record of Gensler ever having meetings with residents or resident groups.

The rest of those who spoke had concerns. The concerns ranged from the competition the retail space on the first floor would bring to Miracle Mile to the cost of the structure, the long-term financials of the project, safety of the rooftop park, screening of the lights, vertigo when driving through the open ramps at the higher floors, the lack of loading docks for the event space and retail shops as well as the City’s lack of observance of its own code allowing for an opening to developers who would wish to do the same.

Another growing concern among residents has been this Commission’s hearing them, but not listening to them. The Commission is constantly saying they want to hear from residents and are holding longer public comment periods as well as sunshine meetings like this one.

Hearing residents is common and easy. The Commission sits and placates the chatter the residents raise and at the end still do what they wanted to do.

Listening on the other hand would find ways to address the concerns of residents and incorporate changes the residents are seeking. A true collaborative effort that includes the community in the design of a project that will tower over Miracle Mile for years to come.

Sources at City Hall informed Gables Insider that resident comments were not going to sway this project at all, as the Commission has made its mind up and there is no intention to make any changes to the project. One source, who wished to remain anonymous explained that staff has been told to push the message that, “if this is not approved as is, Morris will take it over and it will be worse.” This is a public relations technique called, “fear-based marketing, where the marketer plays on the fears of those who they are marketing to.

Gables Insider reached out to Gensler for clarifications on numerous concerns. Gensler’s response did not address any, “Gensler is proud to be partnered with the City of Coral Gables on the Mobility Hub project. We bring world-class design to cities across the country and around the world, and we are thrilled to have the opportunity to support the South Florida community with this innovative and visionary project.”

Gensler is being paid $2,000,000 by the City for this design, an amount that is not included in the $42,000,000 estimate for the construction of the project. (See requisition contract with Gensler)

Thomas O’Malley spoke on behalf of the Coral Gables Neighbors Association about the group’s concerns over the project.

In addition to most of the previously mentioned concerns, the group also has concerns over the financials of the project. O’Malley explained that the City would be taking on a debt of over $40,000,000. This would incur interest payments, which the City believes would be somewhere around 2.5%. The Commission has stated that “money is cheap” now.

O’Malley explained he used the City’s parking study numbers and his calculations show the City operating at a net loss for the foreseeable future.

Gables Insider reached out to Finance Director, Diana Gomez, about O’Malley’s numbers. She explained O’Malley was not wrong when only factoring in parking. However, “his calculations did not use all the revenue parameters that were provided (i.e, parking revenue trends, retail revenue and real estate taxes).  While individually the numbers he presented are correct (i.e., actual revenues, estimated debt service, etc), his calculations and conclusions are incomplete and therefore do not confirm that the mobility hub will operate at a net annual loss as he indicated in his presentation.”

But the City’s study is also old data. It comes from a 2019 pre-COVID-19 study conducted by Timothy Haahs and Associates, which factored in the 750 parking spaces. (See financial study from 2019).

Another factor is the inflation brought about due to COVID-19. An estimate of construction inflation in October by Marcum Advisors stated that the average cost of bids has increased by up to 12.8% in comparison to pre-COVID-19 prices.

The Commission is expected to vote on the facade of the building at a timer-certain 10:00AM time slot at the Tuesday, December 7th City Commission meeting. Residents can participate in person or via zoom https://zoom.us/j/3054466800.

There are no upcoming events at this time.