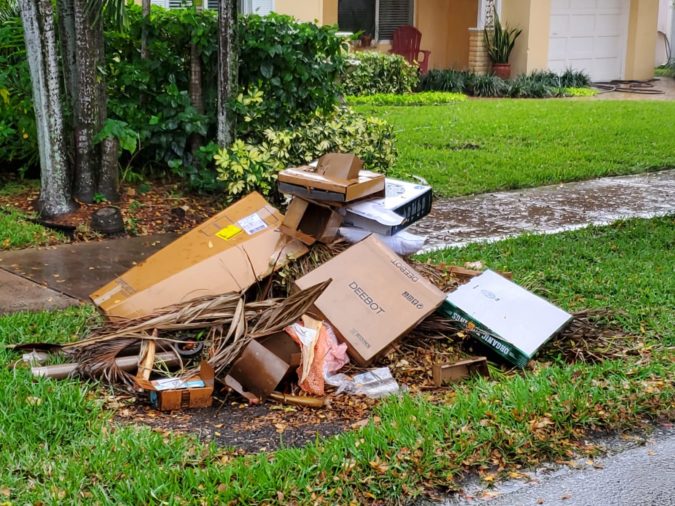 On March 1st, the City’s cardboard box recycling fines ordinance took effect. However, this has angered residents who are decidedly defiant.

Gables Insider drove through the North Gables during trash day and found that nearly 80% of trash pits had cardboard boxes in them. (see gallery below).

Following our recent articles on the cardboard box recycling fines, residents voiced concerns they have with the ordinance.

“In many occasions I have woken up to find boxes, lumber, debris etc… that was not left there by neither myself or neighbor. We should not be held accountable for trash left behind from drive by looters. That should be addressed by the city, before fining residents that already pay high taxes.” commented Dr. Galguera, E on Gables Insider.

“Good Morning. I ask how you will determine which homeowner placed the boxes in the trash pits? Most trash pits are located between properties or on property lines. Also, someone may toss a box on a shared pit but none of the neighbors / homeowners associated with the pit actually placed the box. This appears to be a significant issue.” commented Francisco Oliva on Gables Insider.

“This is ridiculous. you expecting us to now work to break down boxes,which being elderly is difficult and we receive many with online transactions. But we use the boxes to place either heavier trash or irregular trash on the swale. Increase the burden on the citizens! And add a huge fine to boot! More than upset at how the city disregards us …where is our representation?” commented A. Perez on Gables Insider.

“We received a notice three weeks ago after neighbors left boxes on the trash pit. The notice stated that cardboard boxes cannot be placed into the trash pit. At least 3 other home owners use the pit in front of our property. I immediately called the person that left the notice to tell him this information. He stated that he also notified the neighbors. The very next week, more boxes were in the pit. It won’t take long until the City realizes that it is absolutely impossible to fine the correct perpetrator. This was not a well thought out policy or procedure. If our property is fined, we will fill in the trash pit permanently and use a different method to dispose of yard waste,” commented Wesley on Gables Insider.

Gables Insider is working to confirm if any fines have been levied by the City.

Coral Gables residents pay an annual garbage fee at a discounted rate of $762, if paid in full, or $894 if rolled into their taxes.