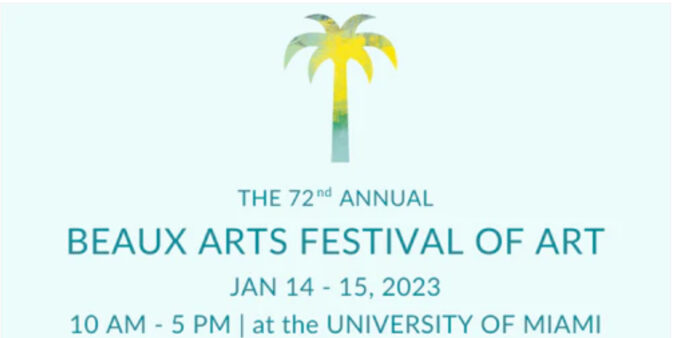 Miami’s longest-running juried art festival will be held on January 14-15, 2023 on the beautiful University of Miami campus.

The festival will feature over 150 fine art exhibitors, a children’s art tent, marketplace, a beer garden, food and live entertainment. This free outdoor community event is ideal for all art enthusiasts, offering artwork in a variety of media and price ranges.

Beaux Arts was founded in 1952 by fifty members under the direction of Anne Atkinson, then Assistant Director of the newly built Joe and Emily Lowe Art Gallery. The purpose of the group was to provide improvements, equipment and financial assistance to the Lowe Gallery, renamed the Lowe Art Museum in 1968.

The Festival of Art

In 1952, the first Beaux Arts Festival of Art, originally called the “Clothesline Sale,” was held. This festival gave young artists a chance to meet the buying public. The Festival of Art became an annual project and is now a juried show with over 200 participating artists in 10 different mediums on the grounds of the University of Miami. It is recognized as one of the leading art shows in the country and attracts acclaimed artists from all over the world.

In 2002 Beaux Arts added the Student Artist Showcase (SAS) to the Festival of Art event weekend. Middle school and high school aged students from both public and private schools enter their works of art to a juried art contest. Over 350 art pieces are judged. The finalists’ and winners’ works of art are exhibited at the Lowe Art Museum during the Festival of Art weekend and a reception is held in their honor. Cash prizes are awarded to winners in five art categories. One student is honored with the Best in Show award.

The Beaux Arts Ball was instituted in 1953 as a major fundraising event, and holds the distinction of being the oldest costume ball in South Florida. Themes vary widely, from “Noah’s Ark”, “James Bond”, to “Oceans Away” and the creativity of costumes makes each year a unique experience.

HandsOn! – A Children’s Celebration in Art

In 1987, Beaux Arts introduced a new outreach project, “HandsOn! – A Children’s Celebration in Art.” Today the program brings underserved kids from all over Miami-Dade County to the museum for a day of fun and learning. The program enables students from Title 1 elementary schools, as well as CHARLEE Homes for Children, to visit the museum free of charge and with paid transportation, learn about specific exhibits and participate in art projects. In 2013, Beaux Arts doubled the size of this program and hosted over 700 elementary school children. In 2014, Beaux reached outside of the museum setting and brought this art appreciation program to children residing at the Chapman Partnership Homeless Shelter.

Built in 1953 with support from Beaux Arts, the Children’s Pavilion at the Lowe is the site of children’s art classes/camp, held primarily during school breaks in the winter, spring, and summer. It is designed to encourage children, ages 5-12, to explore their own creativity. Beaux Arts continues to expand the year-round class offerings, the proceeds of which benefit the Lowe.

In April of 1965, Beaux Arts launched the Virgil Baker American Art Collection for the Lowe Art Museum with a $5,000 contribution. The funds were used to purchase three paintings that marked the beginning of the first major collection of American Art in the Southeastern United States. Since that time, Beaux Arts has purchased and donated over 50 pieces of art to the Lowe Art Museum adding to the Lowe’ s collections. These works include a bronze sculpture, “A Study of New Horizons” by Zorach in 1970, a 17th Century Flemish oil painting entitled “Portrait of a Lady With Her Three Children” by Thomas Willeboirts in 1985, a rare Seminole beaded shoulder bag in 1988, the Mimbre’s Bowls in 1990, and a 4-part costume ensemble by Beau Dick to commemorate the 50th Anniversary of Beaux Arts in 2002.

Today, the 100 Beaux Arts volunteers and 400+ Beaux Arts Associate members work together throughout the year to execute events and to make a difference in the community through many special programs.

During the past 65 years, Beaux Arts has raised over $6 million dollars, which places the organization in the highest donor category for the University of Miami, The Gables Society.  In recognition of Beaux Arts’ $250,000 pledge to the Lowe 2000 Capital Campaign, the Beaux Arts Gallery was dedicated to coincide with the opening of the newly renovated Lowe Art Museum in December of 1996.  In 2011, Beaux Arts was honored by the University of Miami Alumni Association with the White Award. This award recognizes an affiliate group that has made significant contributions to the University. Beaux Arts gave $182,000 over 5 years to contribute to the Momentum II Campaign.

In 2014, Beaux Arts made a donation in the amount of $1.5 million to the University of Miami.  This gift has enabled the creation of the position of Beaux Arts’ Director’s Endowment Fund. The endowment which was the result of hard work from members, past and present, lives in perpetuity and will support increased programming, community outreach, facility upgrades and other projects at the Lowe.  Toward that end, Beaux Arts proudly welcomes the acclaimed art director, Dr. Jill Deupi as the new Beaux Arts Director and Chief Curator of the Lowe Art Museum.

Developing: Developer Removes Plaques At Historic Garden Of Our Lord Before Appeal Complete, “As Instructed By The Commission”