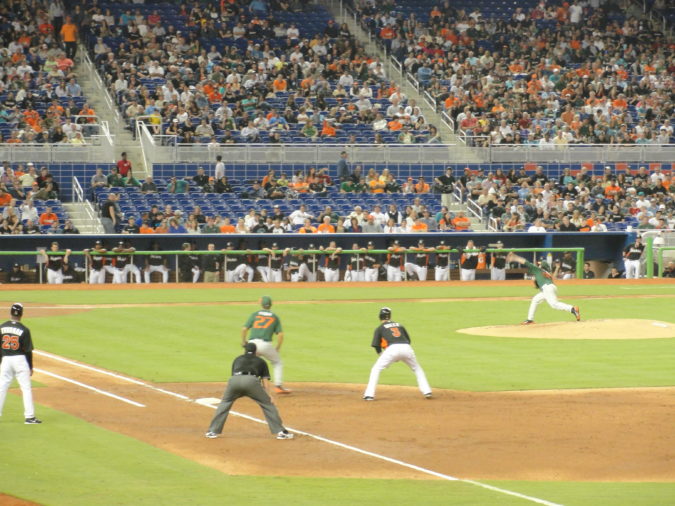 The Major League Baseball First-Year Draft took place Wednesday and Thursday evenings. This year’s draft featured only five rounds due to the COVID-19 pandemic. The draft usually consists of 40 rounds.

However, even though less picks were selected by Major League teams (160 in total), the University of Miami had three Canes selected in the first two rounds and Florida International University had one.

As with Major League Baseball, college and highs school baseball have equally been affected by suspensions of their respective seasons. Players who relied on improving their numbers on draft year were met with shortened seasons, but teams were able to evaluate these player’s full careers and select them based on the talent and potential they had already shown.

Gables Insider collaborator and baseball writer, Mike Kaffee wrote the following about Cecconi: “Picked up by Arizona as the 33rd overall in the first round, he’s expected to sign for an estimated $2.2 million. The mid 90s fastball had more of an influence in getting that first round call. With seasoning in the minors, we will see a more accomplished all around pitcher who hopefully will be able to go deeper in his game.”

McMahon missed a large portion of his freshman year due to injury and missed time his sophomore year as well. His fastball can reach the high 90s and is considered a full package, bringing good stuff and athleticism. McMahon was ranked 29 on the MLB Network rankings. “Chris could develop into a starter. Duration goes with Chris. There is a reason why Chris made Team USA last summer and gave an impressive performance,” Kaffee said of McMahon.

Zamora is the son of former Nicaraguan professional baseball player, Freddy Zamora, Sr. A shortstop with an above average arm, he struggled offensively to begin his career, but has made strides. He is touted for having great range and has the potential of being an every day player on a major league roster. Zamora was ranked 100th on the MLB Network rankings. “Barring injuries, who is my best guess to make it first to the Big Show, I am going with Z. What he showed in preseason play he was a definite front runner and I only seeing him getting better defensively as he settles in,” Kaffee added.

Allen has a fastball in the 90mph range, which can top out at about 93mph. The pitch which has baffled hitters in High School and at the college level has been his changeup. Allen was ranked 46th in this draft class on the MLB Network rankings.

The Miami Marlins had a total of six draft picks this year, including the third overall pick in the draft. The Marlins’ focus this draft was on pitching, selecting two left-handed pitchers and three right handers. With the third overall pick, the Marlins chose Max Meyer, a right handed pitcher from Minnesota. Meyer has been touted as having the best slider in the 2020 draft class and features a fastball that can reach 100mph. The Marlins acted quickly and agreed to contract terms pending a physical with Meyer prior to the completion of the first round of the draft.