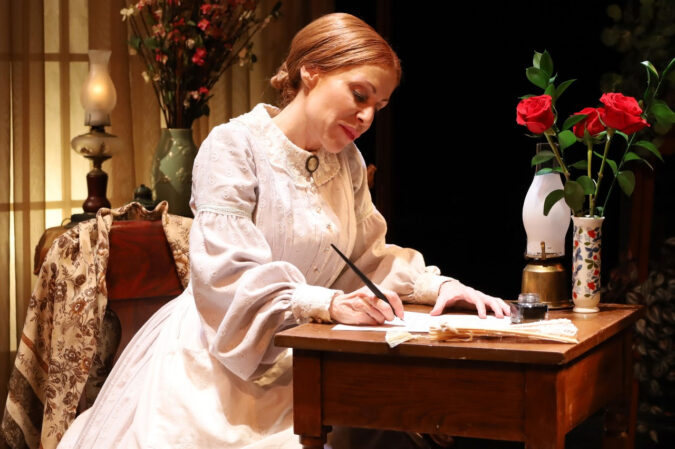 Actors’ Playhouse Artistic Director David Arisco and Palm Beach Dramaworks Producing Artistic Director William Hayes are proud to announce that their companies have joined forces on a virtual coproduction of The Belle of Amherst, William Luce’s one-woman play based on the life of Emily Dickinson. Margery Lowe portrays the enigmatic poet and Hayes directs. The show was filmed on PBD’s mainstage, without the presence of an audience, and will be streamed from April 2-6, 2021.

“We’ve both done a lot of virtual play readings during the pandemic, and we wanted to try something different, to bring a full union production into people’s homes,” said Arisco and Hayes in a joint statement. “We want to set an example of two organizations that are moving forward and figuring out new ways to do things. We’ve known each other for a long time, and we share a mutual respect – for each other, and for each other’s work. So, it just seemed like a no-brainer at this moment in time to do a co-pro and share our talents, our ideas, and, of course, the costs.”

Tickets are $30, and all proceeds benefit Actors’ Playhouse and PBD, supplying much-needed revenue at a time when the theatres are earning very little income. Once a ticket is purchased, the play can be viewed at the ticket holder’s convenience any time from April 2-6, 2021.

The shutdown of theatres last March compelled artistic directors all over the country to consider new ways to deliver content to their audiences. In Florida, it also prompted them to talk and brainstorm. “It seems logical that we’re entering a new era for regional theatre,” said Arisco, who participated in rehearsals and was present during filming. “The need for co-pros and collaboration now seems more evident. We realize we’re not antagonists, we’re not competing. This could lead to future coproductions when we’re back in our theatres, because even though we share a region and we share critics, we don’t share an audience.”

Michael Amico is the set designer, Brian O’Keefe is the costume designer, Kirk Bookman is the lighting designer, and Roger Arnold is the sound designer.

TICKET INFORMATION Tickets are $30 and can be purchased online at www.palmbeachdramaworks.org or by phone 561.514.4042, x2. Patrons who subscribed to the 2020-2021 season of either company and did not ask for a refund, rolling over their subscription to the 2021-2022 season, get to watch for free.

The Belle of Amherst will be available to view April 2-6, 2021 on Music Theatre International’s new streaming platform ShowTix4U. Patrons will receive a link to view the digital production upon ticket purchase. The link is good for 48 hours from first click.