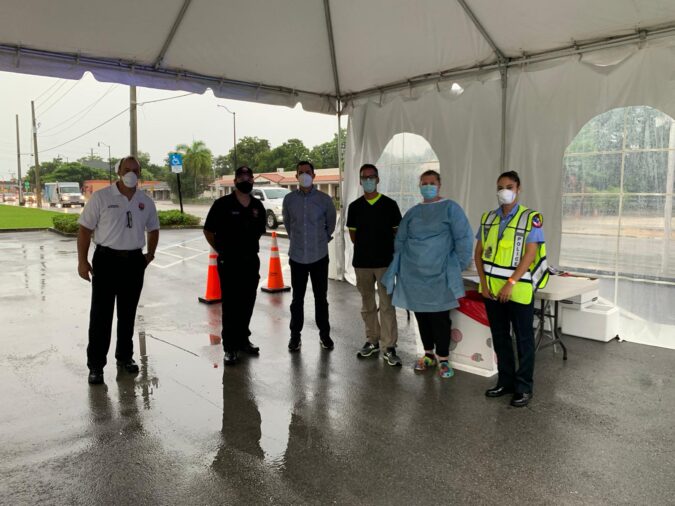 After being closed for nearly 2 months, during which Coral Gables experienced a dramatic rise in the number of cases from 144 to 749, the Coral Gables COVID-19 Test site reopened for its single day of testing this week, on July 22nd.

It was a rainy South Florida day, but tents helped medical staff perform the drive through tests and fulfill all 100 appointments, without any reported issues.

Chief Marcos de la Rosa informed Gables Insider that “we tested everyone who was scheduled. We did not experience any no shows. There were no issues or complications.”

“As an elected official, the safety and public welfare of Coral Gables residents is my number one priority. I am glad to see that the City re-evaluated the need for Covid-19 testing and is now offering residents the opportunity to get tested without having to commute too far. The safety and public welfare of residents has always been and will always be my number one priority. Over the last few weeks many residents have reached out to me urging me to have the City administration move forward with a plan to offer a Covid-19 testing site in Coral Gables. I’m pleased to report that we were able to respond to these requests and deliver an effective testing alternative. During the first day alone over 120 residents signed up for testing and I have received a great deal of positive feedback within the last 48 hours” said Vice Mayor Vince Lago who was present at the site when it reopened.

Testing will next be available on July 29th. Gables Insider has been informed there are still a few appointments available. Residents who seek testing can schedule their appointment through the City’s appointment system.