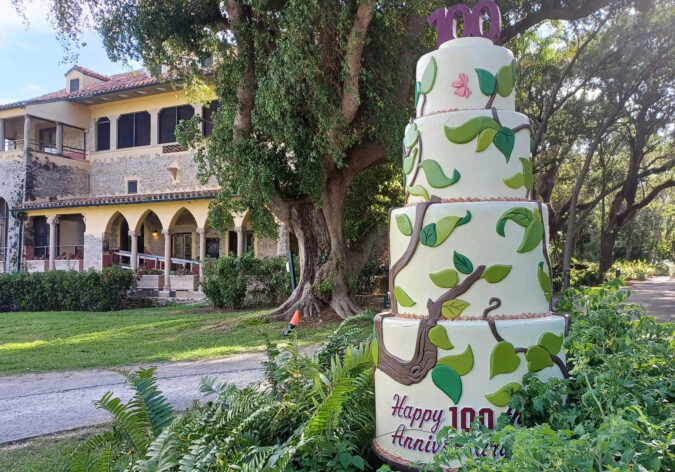 The tall cake with an iconic “100” topper festively stands as a marker of history.

The Historic Preservation Association of Coral Gables successfully achieved another unique event as part of its destination series titled “A Stone’s Throw Away: 100 Years of the Deering Stone House.” The affair shared the legacy of architect Phineas Paist who, aside from designing the custom-built Mediterranean Revival stone house at Deering, he also designed landmarks in Coral Gables.

Paist was the supervising architect for the Coral Gables Corporation and designed and/or architecturally collaborated in the city’s most important landmarks such as the Venetian Pool, Coral Gables City Hall, the Douglas Entrance, San Sebastian Apartment Hotel, and the 1939 Coral Gables Police and Fire Station, which today is home to the Coral Gables Museum. All of which are on the US Register of Historic Places.

The event was a fundraiser to benefit historic resources and their preservation. The gathering brought members and friends of HPACG to the Deering Estate for an afternoon of enjoyment immersed in history and celebration of the 100th anniversary of the construction of the Stone House. Melissa Diaz, exhibits and collections manager at Deering, offered a private guided tour that included historic photographs, objects, and hidden architectural elements of the estate with an interesting visit to the wine cellar which opened after undergoing extensive restoration and preservation work. Hidden behind a false-wall and a three-ton bank vault door in the basement is a room that housed 4,500 bottles of champagne, wine and spirits, hidden during the Prohibition. It was flooded by a 1945 hurricane and its combination lost. It remained sealed until 1985, when the estate hired a famous safe-cracker to break in. The wine cellar has been restored to include hundreds of vintage bottles.

Richard Heisenbottle was a special guest who spoke on the restoration work of the 100-year old property. Heisenbottle, who is founding principal of R.J. Heisenbottle Architects, has over forty-years of expertise in all aspects of architecture with a specialty in historic preservation projects. He was accorded the American Institute of Architects highest honor when he was elevated to AIA Fellow in 2005. He is the recipient of the 1998 National Preservation Award from the National Trust for Historic Preservation.

After the special tour, guests had the grounds all to themselves to enjoy with a delightful picnic by the bay. Refreshments included mini bottles of J. Roget sparkling spumante— for that perfect toast to a perfect day!

The finale culminated with guests gathering by the 10-ft cake “just a stone’s throw away” from the Stone House to wish the estate an animated “Happy Birthday!’ The cake, decorated with colorful flowers and an iconic “100” topper festively stands as a marker of history.

The Stone House at one hundred is a national landmark that has stood the test of time.

The custom-built Mediterranean Revival Stone House was designed for Charles and Marion Deering by Phineas Paist, best known for his extensive work in Coral Gables, and inspired by Charles’ majestic Spanish properties, Maricel and Tamarit. The house was built to house Deering’s important art collection brought from Spain and was designed to ensure the safekeeping of those treasures that included paintings by Old Masters, antique sculpture, iron work and textiles, as well as works by the great contemporary artists of Charles Deering’s time including John Singer Sargent and Ramon Casas.

The Stone House represents an architectural tapestry of the world travels, intellectual and philosophical interests and ideas of Charles Deering. In 1922, Deering entered into an agreement for the construction of the Stone House with Sandquist & Snow, Inc., the firm working under the direction of architect Phineas E. Paist. Charles likely became familiar with Paist in 1916, when he worked as an associate architect to Paul Chalfin in building the Villa Vizcaya, James Deering’s [Charles’ brother] palatial residence in Florida. The construction of the Stone House took approximately 11 months to complete. An Otis elevator in the Stone House was one of the first private residence elevators to be installed in South Florida. The Stone House’s construction includes many recognizable architectural references of the popular Mediterranean Revival style established throughout the United States in the 1920s and 30s. Stylistic elements include stucco walls, red tile roofs, wrought iron grilles and railings, oolitic limestone, ceramic tile, arcaded walkways; and most notably, a carefully selected color palette: yellows, ochre, amber and tinted stucco reflecting tonalities warmed by the sun overtime. 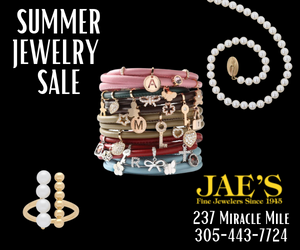