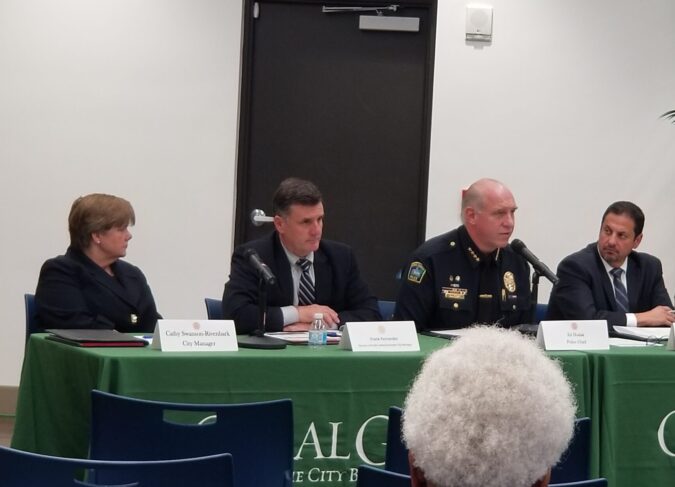 The City of Coral Gables’ independent investigator, former United States attorney for the Southern District of Florida, Roberto Martinez, concluded a two-year investigation to determine, if possible, who authored or sent the city a two-page anonymous letter along with a USB thumb drive which contained a video and photo alleging misconduct by Chief of Police Edward J. Hudak, Jr. while stopping by a pool party organized by women officers.

What started with a splash ended up in a tidal wave for 14 female officers who became victims in an anonymous complaint letter signed “A Coral Gables Police Department Female Police Officer”. The letter was dated July 31, 2017 yet it took the city nearly a year to open up an investigation after demands by the female officers via union representatives to seek answers for the misportrayal of the pool party that went viral throughout South Florida and internationally.

The investigation expanded to include yet another anonymous letter dated November 20, 2017, addressed to the former city manager, Cathy Swanson-Rivenbark.

‘Based on a review of all the evidence, including a forensic document examination, the investigation was unable to reveal the identity of the author or sender of the Anonymous Complaint Letter. However, the forensic document examiner engaged by Mr. Martinez concluded that in his professional opinion with a high degree of probability Ms. Swanson-Rivenbark wrote the address that appears on the envelope of the Anonymous November Letter.’

A copy of the forensic report was made available to Swanson-Rivenbark. Her own hired expert concluded she ‘very probably did not’ write the address that appears on the envelope. Swanson-Rivenbark hired attorney Benedict Kuehne for representation.

A statement received by Mr. Kuehne on behalf of Swanson-Rivenbark said in part the following:

“The City’s Report is false and misleading. Cathy Swanson-Rivenbark
has been clear: she had NO INVOLVEMENT in any way with any
“anonymous letters” sent to the City.”

Vice Mayor Vince Lago along with Commissioner Mike Mena each co-sponsored the item which lead the charge for the city to investigate finding out who was behind the anonymous letter.  Lago told Gables Insider “In the City of Coral Gables we have zero tolerance for intimidation tactics and smearing of anyone’s character. I look forward to Mr. Martinez’s presentation on July 14th to an open discussion with our city attorney to address what our legal options are moving forward.”

“It took a little longer than I would have liked but I’m glad the women officers are getting some answers. Where we go from here remains to be seen. The report speaks for itself, but I’m glad we’ve been presented with the information and now anyone who reads it can come to their own conclusion.” said Commissioner Mena.

“I am thankful to former U.S. Attorney, Bob Martinez, for his pro bono service to the City in conducting the investigation. I was not in City Hall when the events in question transpired, but the report speaks for itself. I hope the conclusion of the investigation brings finality to the matter and closure for everyone who was dragged into it,” said Commissioner Jorge L. Fors, Jr.

The report will be discussed along with a presentation from Mr. Martinez at the July 14th, 2020 commission meeting.

While the external investigation to determine the source of the letters is over, there could be more to come. “I have not seen the Martinez report. I will let the report speak for itself. The police departments internal investigation is still ongoing and will incorporate all other aspects of any other outside investigation.” said Chief Ed Hudak late Thursday night.

Click Here for the Investigator’s Memo to the Commission