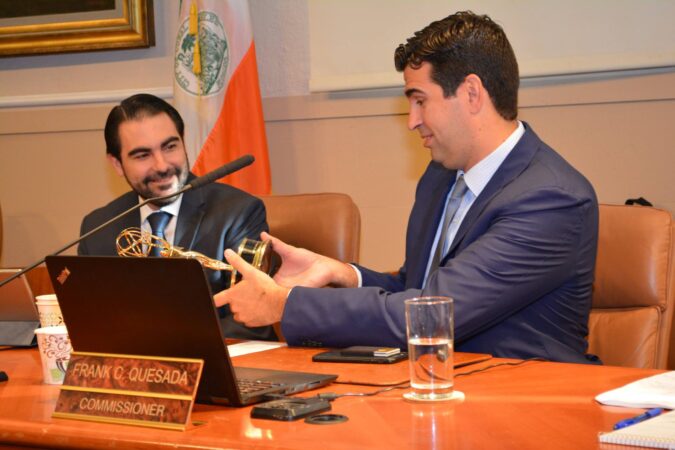 Gables Insider shone light last week into the questionable proposed sale by the City of the property at 350 Greco Avenue, a surface parking lot near Merrick Park which the City recently used as its COVID-19 testing site.

The sale was discussed at the Tuesday, May 11th, City Commission meeting and passed unanimously on first reading, requiring a second vote to complete the Commission’s approval and proceed to closing.

The sale, as proposed by the City, would be to the owner of the two adjacent lots who intends to build a structure and incorporate a parking garage with 34 parking spaces to be used as public parking.

Prior to the final vote, Vice Mayor Michael Mena publicly stated that “one quick comment that I wanted to mention. The individuals who are looking to purchase this property happen to also be the owners of the company for which I work. The company has nothing to do with this transaction, its them in their individual capacities. I have spoken to [City Attorney] Miriam [Ramos] to ask if there is any conflict there. I have been told there is not, because I have no financial interest whatsoever in this, its something they are doing in their individual capacities, but I wanted to mention that in the spirit of transparency and let everybody know that. Regardless, if my four colleagues vote for it, it doesn’t really, my vote won’t have an impact anyway at that point, so I wanted to disclose that to everybody before we proceed.”

Following the vote, Gables Insider reached out to City Attorney Miriam Ramos to secure a copy of her conflict of interest opinion. None was available, as the City Attorney stated that, “my opinion was verbal and concluded that he did not have to recuse himself from voting on this matter.” When asked who the developer was, she replied, “unknown to me at this time.”

Ramos was appointed City Attorney on November 14, 2017, Quesada voted in favor of her appointment and served on the Commission through April 26, 2019.

In the cover memo provided by the City on this agenda item, it states that “The City (the ‘Seller’) was approached by the owners of the two (2) lots adjacent to the south of the Property who expressed an interest in purchasing the Property from the City.”

The two properties to the south of the Greco lot are 4251 South LeJeune Road and 4601 South LeJeune Road. The properties are registered with the Miami-Dade County Property Appraiser’s office to 4601 Coral Gables Property LLC. That company is registered with the State of Florida Division of Corporations linked to the names of John H. Ruiz and Frank C. Quesada at the listed address of MSP Recovery Law Firm (2701 S LeJeune Road, 10th Floor in Coral Gables).

The proposed sale is being made to a separate entity however. The listed buyer is JRFQ Holdings, LLC, a Delaware registered corporation. According to LegalZoom, registering corporations in Delaware is popular for several reasons, one of them being that “when you file in Delaware, you don’t need to disclose your directors’ and officers’ names to the state. This allows for anonymity.”

Although the corporation is registered to a corporation that specializes in registering corporations in Delaware, the initials used in the Holding Group, JRFQ, are the same as those of the principals of MSP Recovery and the listed agents of 4601 Coral Gables Property LLC, John Ruiz (JR) and Frank Quesada (FQ).

“The owner/principals from JRFQ Holdings, LLC (the “Purchaser”) submitted a Purchase and Sale Agreement (the “PSA”) to the City that became effective on February 8, 2021,” stated the City’s Cover Memo.

In his letter of concern, Winker asserts that, “If Commissioner Mena’s employers are in fact owners of the entity being sold property owned by the City, it would appear that Commissioner Mena speaking in support and voting in favor of such sale is not just an appearance of impropriety, but a situation expressly prohibited under Florida law.” It continues, “The Code of Ethics for Public Officers and Employees provides at Fla. Stat. § 112.313(7)(a): No public officer or employee of an agency shall have or hold any employment or contractual relationship with any business entity or any agency which is subject to the regulation of, or is doing business with, an agency of which he or she is an officer or employee…Commissioner Mena appears to have a prohibited conflict of interest because the City is contemplating selling a City-owned property to an entity owned by Commissioner Mena’s law partners. This analysis would appear to be the same under the Miami-Dade Code of Ethics and the Coral Gables Code.”

Matters of violation of ethics are not handled directly by the City, they are handled by the two Ethics Commission independently. They have the sole authority and discretion to investigate matters and render judgement.

The property was first referenced by the Commission at the May 14, 2019 meeting, the first meeting following the retirement of Quesada from the Commission. However, video from that day reflects the City had been working to find a partner for the sale of the property leading up to that date.

Interestingly, then Mayor Raul Valdes-Fauli, explains that “this should not have been in the Mayor’s comments, but here it is” referring to the placement of the item on the Agenda.

The City Manager explained at the time that the City had not made a final decision on whether to sell the property, as they were considering their options, including “creating a park.” He added that the City was reaching out to the developer of both the southern lots and the eastern lots to try to negotiate a sale.

At that meeting, Mena stated that, the City Manager should have the discretion to “focus more on the development aspect of it than just the monetary. I think we all want to see, and I speak for everyone up here, the best project possible there that is in line with what we want to see,” when deciding who to negotiate with and who not to.

The motion to direct the manager to begin negotiations was moved by then Commissioner Pat Keon and seconded by Mena. It passed unanimously.

The City code in section 2-1091, requires that, “an advertisement soliciting proposals for said sale or lease published in a daily newspaper of general paid circulation in the city, allowing not less than 60 days for the city’s receipt of proposals from prospective purchasers or lessees.” However, the action taken by the Commission to direct the manager to negotiate a deal rescinds that requirement.

The sale, as considered, is using a February appraisal of the lot, which valued the lot at $3,525,000. The agreed sales price is $3,500,000, $25,000 under the appraised value. The City negotiated for the owner/developer to incorporate a parking garage with 34 public parking spaces, which the owner will have full financial benefit and control over. The management of the lot until the start of construction will be done by the City with a 50-50 split on profits.

At the request of Mayor Vince Lago and Commissioner Rhonda Anderson, the City Manager was asked to work with the developer to install charging stations for electric and hybrid vehicles and re-engage with Tesla to re-attempt to secure super chargers at that location.

Gables Insider has tried to secure copies of the plans of the proposed project, but as of publishing, staff had not replied to the public record request.

The proceeds from the sale of the lot are projected for use in the construction of parking garage 7, which will be adjacent to the new Police and Fire Departments Headquarters building.

Quesada has remained active in Coral Gables politics since leaving office. He has raised funds, endorsed and/or campaigned for all current members of the City Commission.

Mayor Lago, Commissioner Anderson, Commissioner Jorge L. Fors, Jr. and Commissioner Kirk Menendez all told Gables Insider that Quesada had not lobbied them in favor of the sale of the property and that their votes were strictly based on the merits of the sale.

No impropriety has been alleged of any of these members of the Commission.

Gables Insider reached out to Commissioner Mena about the potential conflict of interest, this was his response: “Frank disclosed to me that they made an offer so that I would be aware, but that was it. We never discussed any particulars as I don’t get involved in their personal business away from MSP Recovery. I checked with the City Attorney to confirm that I didn’t have a conflict of interest, which she did confirm. Regardless, I made sure to disclose it at our meeting today to ensure full transparency. As set forth in the cover memo attached to the agenda item, the Property Advisory Board, the Parking Advisory Board, the Budget and Audit Advisory Board, and the Economic Development Board, all independently reviewed the proposed terms and recommended that the City enter into the PSA (which price is based on an appraisal). That was in addition of course to the CM’s recommendation. And today’s vote was 5-0.”

The State and County Ethics Commissions will independently decide whether to investigate if any alleged impropriety took place by Mena. Meanwhile, the sale will be taken up for a final vote by the Commission at the May 25th Commission meeting. If Mena were to need to recuse himself from this vote, a super majority of the remaining four Commissioners would be needed to approve the sale.